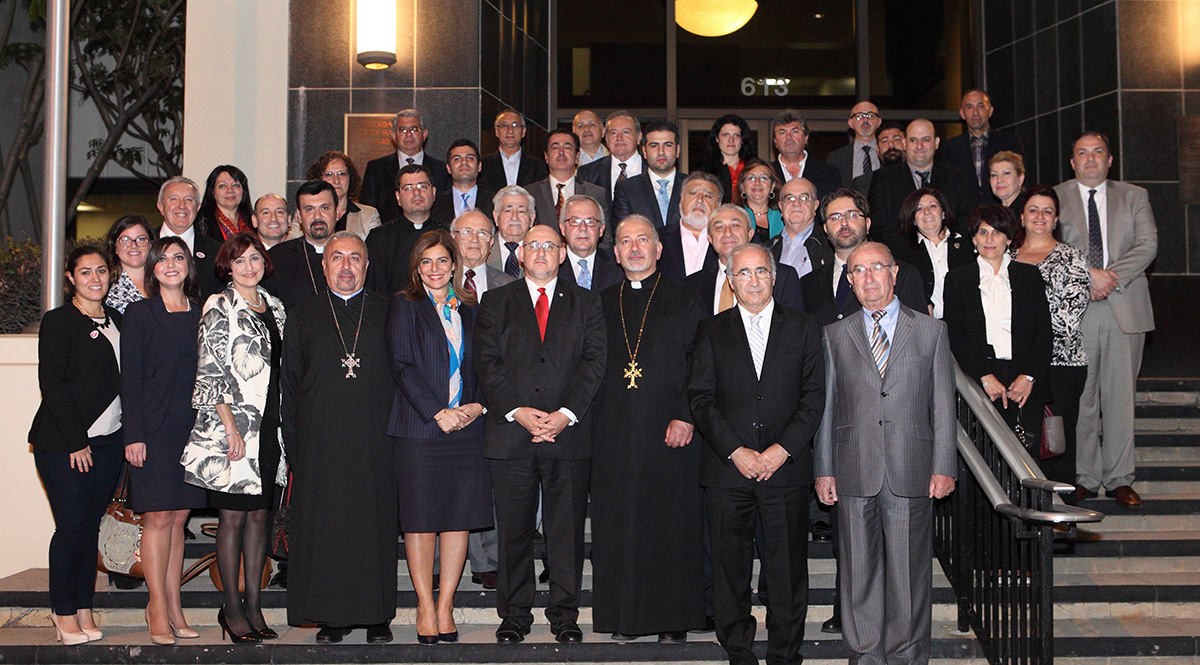 GLENDALE – All five members of the Glendale City Council voted on November 4, 2014, in favor of a motion to enter into an Exclusive Negotiating Agreement with the Armenian Genocide Centennial Committee of Western US (AGCC) for the ground lease of a 1.7 acre property located to the south of the Glendale Civic Auditorium and across the street from Glendale Community College.

Earlier this year, the AGCC announced its interest to build a Museum and Educational/Cultural Center in Southern California. After exploring numerous locations throughout Los Angeles County, the organization identified a site in Glendale with the characteristics for a world class museum and cultural/educational center.

In her introductory remarks, AGCC Co-Chair Talin Yacoubian observed “It is not often that one finds such a wide cross section of a constituency or community wholeheartedly supporting any single project, but the magnitude, relevance and importance of this project has created an indivisible bond, not only among the Armenian community but beyond.”

Representatives of the 19 organizations on the Board of the AGCC, its Landmark Sub-Committee, members of the Armenian Genocide Memorial Council of Glendale as well as several dozen community organizers and volunteers were in attendance at the Council meeting to express their support. The more than 100 people who attended the Council meeting applauded when the Council voted 5 – 0 to adopt the motion to initiate the exclusive negotiations.

“We have decided to build a Museum and a Cultural and Educational Center that strives to transform lives, and a Memorial Monument to fallen victims of crimes against humanity, to promote all that is just in the United States of America, and, ultimately be, a destination venue for all,” explained AGCC Co-Chair Garo Ghazarian in his remarks to the members of the Council.

His Eminence Archbishop Hovnan Derderian told the Council members that he was delighted that they have taken this initiative. He stated, “This Museum with its Cultural and Educational Center and Memorial will be a symbol of life; a symbol of resurrected life; a symbol of justice; a symbol to adhere to history and culture; a symbol of an important monument which will invite us all to embrace heroism in our lives.”

Western Prelate Archbishop Moushegh Mardirosian was out of the country on official church business but sent a message expressing his support. The Prelate’s message states, “All of these objectives and more, will be achieved by the synergy of the placement of a Museum, next to the Civic Auditorium and the Glendale Community College, which, will benefit all three establishments, as well as the surrounding neighborhoods, and the City of Glendale as a whole.”

Each Council member expressed support for the project and willingness to work with the AGCC during this critical phase of exploring the feasibility of building the Museum, Cultural/Educational Center, and Memorial on this site within the next few years.

Approximately 3,000 sq. ft. of this 1.7 acre property had already been reserved for the construction of a Monument to the victims of the Armenian Genocide and Man’s Inhumanity to Man. City Mayor Zareh Sinanyan informed the audience that he was pleased to have received the communication from the Armenian Genocide Memorial Council of Glendale expressing their willingness to join the efforts of the AGCC and to have the area reserved for the monument included in the ground lease negotiations.

The report presented to the City Council by City Manager Scott Ochoa and Director of Economic Development Philip Lanzafame states that the museum and education center is scheduled to include exhibit galleries, a theater, research space, classrooms, an outdoor plaza, and a memorial.

In his remarks, Lanzafame stated, “The elements and size of the proposed museum and education center will be further defined by the research, discussions, and reports that would occur during the term of the exclusive negotiating period.”

Although the term of the exclusive negotiating period is 12 months, the AGCC spokespersons expressed their desire to make sufficient progress by April 2015 to unveil the conceptual design for the Museum complex and construct an interim memorial on the site by the 100th Anniversary of the Armenian Genocide.