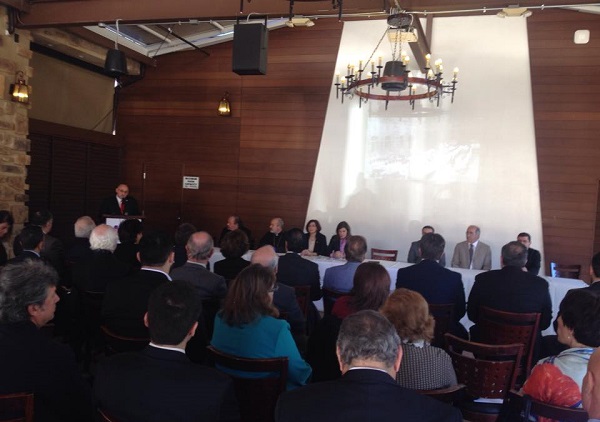 GLENDALE – The Armenian Genocide Centennial Committee of the Western United States (AGCC-WUSA) during a press conference it hosted on Wednesday announced five major events its body is organizing in Los Angeles to commemorate the 100th anniversary of the Armenian Genocide and published a list of events that will take place throughout the Western United States.

During a press conference held at Phoenicia Restaurant, Co-Chairs Garo Ghazarian, Esq., and Taline Yacoubian, Esq., announced the committee’s active preparations to commemorate the souls of the 1.5 million massacred Armenians and to duly honor the lives of both Genocide survivors and heroes who facilitated the sacred mission of rescue and relief.

With the motto of “We Remember. We Demand,” Ghazarian kicked off the press conference and in a moving presentation pledged the Armenian-American community’s commitment to commemorate the Armenian Genocide centennial in a dignified manner befitting the memory of the martyrs.

He also highlighted the community’s commitment to the pursuit of the international recognition of the Armenian Genocide, as well as the necessary territorial and monetary reparations and restitution that have been the cornerstone of the struggle for justice for the Armenian Genocide.

“It is an honor to work with 19 organizations and religious leaders in a joint effort to honor the Centennial of the Armenian Genocide,” remarks Co-chair Ghazarian. “A Century later, we continue to prove our people’s resilience and strength as evidenced across our Diasporan communities worldwide. Through our collaborative and dynamic events we will feature the robust and thriving spirit of our Armenian-American communities in the Western United States.”

In her remarks, Yacoubian focused on the committee’s plans to establish an Armenian-American museum in Glendale, explaining that a sub-committee under the auspices of the AGCC has been hard at work in realizing this effort. She added that the parcel of land has already been allocated by the City of Glendale and requests for proposal on architectural bids have already been publicized.

Yacoubian also announced that the committee has been consultation with the New York-based Lord Cultural Resource Inc. for the curatorial aspect of the museum. The company, she said, is a renowned entity that has worked with several well-known museums in the country.

“This not a pipe dream as some people may say,” said Ghazarian about the plans for the museum. “It is a reality and it will be a great accomplishment.

On April 14, 23, 24 and 26, 2015, tens of thousands will gather in Los Angeles to commemorate the Centennial of the Armenian Genocide. While honoring the lives of martyred ancestors, communities will also give thanks for the creation of a new Armenia and for the flourishing Armenian communities around the world forged by the will and heroism of Genocide survivors.

Five major events will carry these themes forward:
On April 14, a special ecumenical service at the Roman Catholic Archdiocese of Los Angeles, the Cathedral of Our Lady of the Angels, will take place with the participation of representatives and interfaith leaders from various churches and religious denominations. Civic officials from the City of Los Angeles will also be in attendance. Prayers of remembrance, respect, and unity will signal a powerful message of solidarity to mark the commencement of the commemorative events taking place in the following weeks.

On April 24, The March for Justice is the largest in the series of AGCC-WUSA hosted events. Participants will gather at 10AM in Little Armenia and will march in solidarity for 6 miles to the Turkish Consulate in the Wilshire District to protest the Turkish government’s continued denial of the Armenian Genocide. This Pan-Armenian March will unite, without exception, the Armenian community in its quest for justice while demonstrating collective strength and spirit. Protesters will thank those who have helped to spread awareness of the Armenian Genocide, and those who work tirelessly to prevent genocide elsewhere in the world.

On April 25, mourners will gather at the Armenian Genocide Monument at Bicknell Park, 910 Via San Clemente in Montebello for a solemn gathering to honor the lives of the 1.5 million Armenians massacred in the Armenian Genocide. This annual commemoration includes a candle light vigil at the helm of the Martyrs monument.

On April 26, the City of Glendale hosts an annual commemoration of the Armenian Genocide. This year they will partner with the AGCC to host a joint event commemorating the 100th anniversary at the Alex Theater. This event will include screening of documentaries, musical performances, and a key note speaker. Further details will be announced.

“Our goal is to bring the entire Armenian-American community together on the solemn occasion of the Genocide’s Centennial,” commented Co-Chair Yacoubian. “As we gather in remembrance to honor the lives and memories of our martyred grandparents, great-grandparents and great-great grandparents, we will pay tribute to those individuals and organizations who rescued and rehabilitated the survivors of the Genocide for whom we are, and will remain, eternally grateful.”

The AGCC-WUSA was established to steer and coordinate the multifaceted commemorative activities in the Western United States and is composed of nineteen (19) Armenian organizations, including religious institutions.

The 100th anniversary of the Armenian Genocide signifies a global demand for justice by Armenians worldwide and all people of good will. The Centennial marks one of the 20th century’s greatest crimes against humanity. In 1915, the Turkish Government began a premeditated and systematic campaign to uproot the Armenian population from its ancestral homeland and slaughter 1.5 million defenseless men, women and children. Turkey must finally acknowledge its responsibility for the Genocide and make appropriate moral, financial and territorial restitution, as mandated by the fundamental norms of international law and civilized society.